Summary
A solid which is isotropic with respect to coordinate rotations but not with respect to inversions is called noncentrosymmetric, acentric, hemitropic, or chiral. Chirality (hemitropy) has no effect upon the classical elastic modulus tensor. In Cosserat elasticity, chirality has an effect. Asymmetric stress is allowed in Cosserat solids.
A chiral or hemitropic micropolar cylindrical rod is predicted to undergo torsional deformation when subjected to tensile load, so a chiral material will twist when stretched. Classical elasticity cannot account for such phenomena. These concepts lay the groundwork for chiral metamaterials or chiral architectured materials or chiral architected materials; we did not use such terminology. Use of 3D printing facilitates making such materials.

Experimental stretch twist coupling was presented in
R. S. Lakes, Is bone elastically noncentrosymmetric?, Proc. 34th ACEMB. Houston (1981).
Get pdf.
This is likely the first observation of elastic chirality in a material.

Lakes, R. S., "Elastic and viscoelastic behaviour of chiral materials", Int. J. of Mechanical Sciences, 43, 1579-1589, June (2001).
Chiral materials are not invariant to inversions: there is a distinction between right and left handed material. Material properties such as piezoelectricity and pyroelectricity, represented by tensors of odd rank, can only occur in chiral materials. Chiral effects in elasticity cannot be expressed within classical elasticity since the modulus tensor, which is fourth rank, is unchanged under an inversion. We consider effects of chirality in elastic materials described by a generalized continuum representation, specifically Cosserat elasticity. Analysis of several configurations discloses a chiral material to generate reaction moments when compressed as a slab. A chiral plate bent to hyperbolic shape is predicted to exhibit size effects from the Cosserat characteristic length, and a shear force from the chirality. This analysis can be used for the interpretation of experiments on compliant chiral materials, in particular the evaluation of the elastic constants. Viscoelastic chiral solids are examined in the context of the correspondence principle. Chiral solids exhibit stretch twist coupling. Download pdf here. 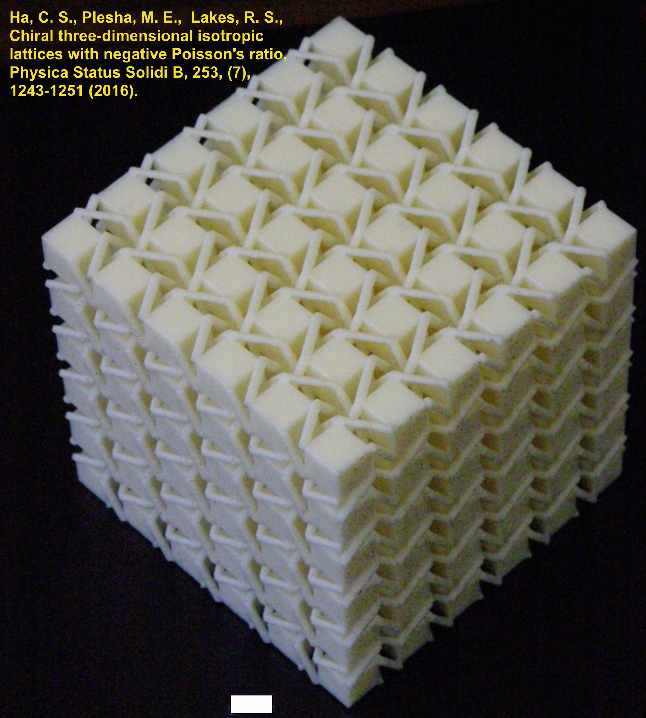 Ha, C. S., Plesha, M. E., Lakes, R. S., Chiral three-dimensional isotropic lattices with negative Poisson's ratio, Physica Status Solidi B, 253, (7), 1243-1251 (2016). DOI: 10.1002/pssb.201600055
Chiral three-dimensional isotropic cubic lattices with rigid cubical nodules and multiple deformable ribs are developed and analyzed via finite element analysis. The lattices exhibit geometry dependent Poisson's ratio that can be tuned to negative values. Poisson's ratio decreases from positive to negative values as the number of cells increases. Isotropy is obtained by adjustment of aspect ratio. The lattices exhibit significant size effects. Such a phenomenon cannot occur in a classical elastic continuum but it can occur in a Cosserat solid. The material exhibits squeeze-twist coupling and stretch-twist coupling.
This is the first three-dimensional metamaterial that is chiral; we did not call it by such a name. It also may be called a truss metamaterial.
journal link. Figure on cover link
preprint pdf

D. Reasa and R. S. Lakes, "Cosserat effects in achiral and chiral cubic lattices", Journal of Applied Mechanics (JAM), 86, 111009-1, 6 pages Nov. (2019).
Cubic 3D lattices were designed, made by 3D printing, and studied experimentally. One lattice was simple cubic with ribs of diameter 1/5 the cell size. The second lattice was chiral, with spiral ribs. The chiral lattice, but not the achiral lattice, exhibited squeeze-twist coupling with size effects. Squeeze-twist coupling cannot occur in a classically elastic solid but is anticipated by theory in a Cosserat solid. Both lattices exhibited size effects in bending and torsion. These also may be called truss metamaterials.
https://doi.org/10.1115/1.4044047 https://doi.org/10.1115/1.4044047

D. R. Reasa and R. S. Lakes, Nonclassical Chiral Elasticity of the Gyroid Lattice, Phys. Rev. Lett. 125, 205502, 13 November (2020).
The gyroid lattice is a metamaterial which allows chirality that is tunable by geometry. Gyroid lattices were made in chiral and non-chiral form by 3D printing. The chiral lattices exhibited nonclassical elastic effects including coupling between compressive stress and torsional deformation. Gyroid lattices can approach upper bounds on elastic modulus. Effective modulus is increased by distributed moments but is, for gyroid cylinders of sufficiently small radius, softened by a surface layer of incomplete cells. Such size dependence is similar to that in foams is but unlike most lattices.
journal link
preprint pdf

Chiral structures have been observed in trees by Professor Cherkaev of the Mathematics Department at the University of Utah.